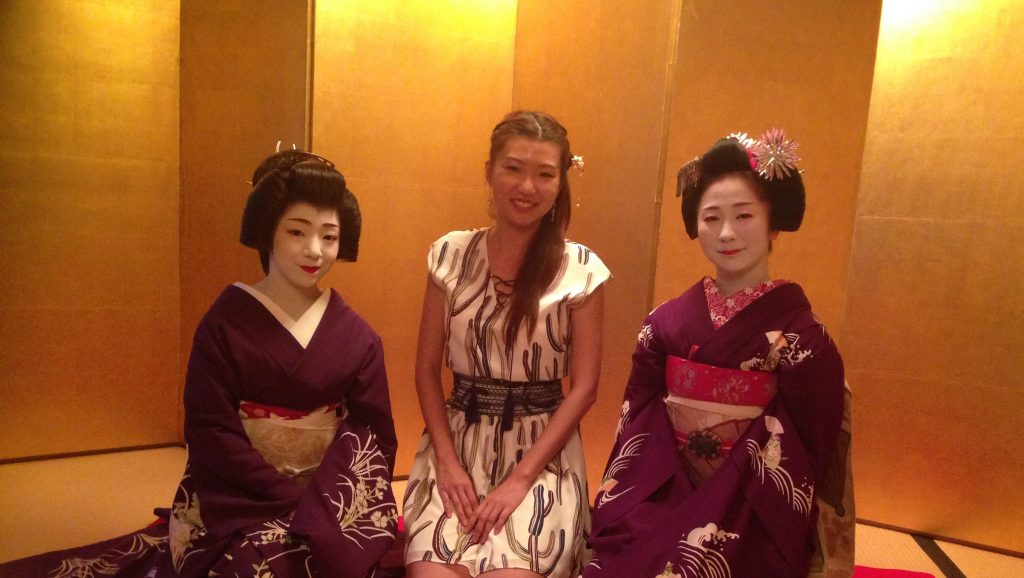 A Glimpse at the Life of a Geisha

Just the word brings lots to mind – old-world mysterious woman from the Japanese Edo period, always beautiful and perfect in her flowery kimono, porcelain white face and crimson lips, always singing and dancing with grace, always smiling even when you doubt she can always be happy.

I used to think she has disappeared and what I have known from media like ‘Memoirs of the Geisha’ are reminiscences of this mysterious historic figure 400 years ago. No woman like her can be found in the modern world, or so I thought until I visited Kyoto – city of traditional Japan. I had one of my most unforgettable night when I partied with two beautiful young women, a Geiko and a Maiko (apprentice geisha) in one Kyoto restaurant in Gion district!

Over dinner, Geiko told me that this tradition is still present, deep in the shadow of modern Japan. Although she has some freedom to live independently of her tea house (unlike before) and she travels on trains and uses mobile phone like any other modern woman, learning the trades of  the geisha remains strictly traditional. She remains under the jurisdiction of her tea house which grooms her and mentors her on singing, dancing, playing instruments, holding tea ceremonies and most of all, the art of hosting. No one can meet her privately without an arrangement with her tea house.  Training is very hard, she has only two off-days every month. Even so, she said she is better off now that she is qualified geiko, and enjoys certain liberties exclusive to Maiko. Geiko also proudly earned her collection of more luxurious kimonos. Deceiving simpler in design compared to Maiko’s kimonos, Geiko’s kimono are made of finer threads, and designs are kept simpler to show the hems, but not around her neckline, her chest, or her wrists, otherwise the designs distract the yearning gazes on her.

When asked what privileges Geiko has over Maiko , seventeen year old Maiko said she has only completed two out of the six years needed to be a Geiko. Unlike Geiko, Maiko lives strictly under her tea house in which she undergoes tough and rigorous training in total seclusion. She is forbidden to use the internet or own a mobile phone. At night, she wears her massive, impeccable hair bun to sleep. And this is only possible because she rests her head on a hard wooden case which is her pillow! Behind her womanly grace, Maiko is a young spirited girl who tries very hard!

However, both Geiko and Maiko were quite tight-lipped about their reasons to be geishas. Although I was very curious, I had no doubt when I watched them that they put everything they do with genuine love for their clients. When they took stage to perform, even childlike Maiko shone like a goddess. 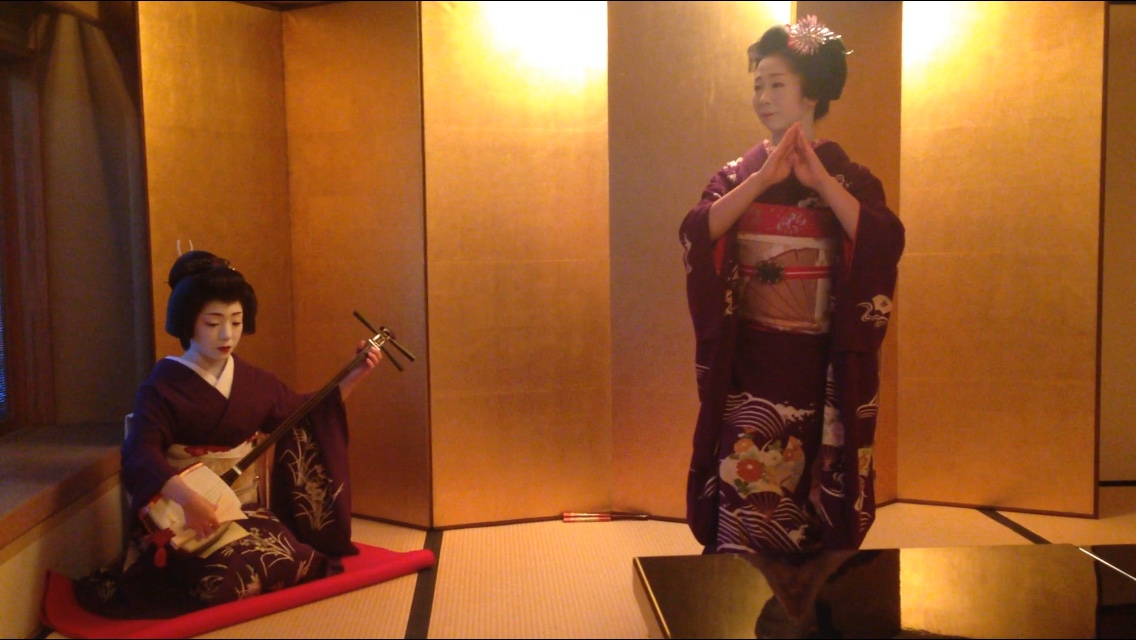 Song of the Fan video

Maiko commanded attention immediately when she got up to dance to Geiko singing and playing ‘Song of the Fan’ on the shamizen. The song was ruminating and a little melancholic,  in a somewhat minor mode and felt a bit like a narrative chant, with the end of each verse on a momentarily longer note of the ‘home key’.

Maiko’s dance was very courtly and graceful. It was deeply communicative, through her emotive facial expressions and her slow fluid movements. Posing was also very much part of the dance form. Don’t be fooled by her seemingly effortless dance, there was one moment Maiko threw her fan in the air, made a quick turn and caught the fan with the same hand. Maiko was well trained! 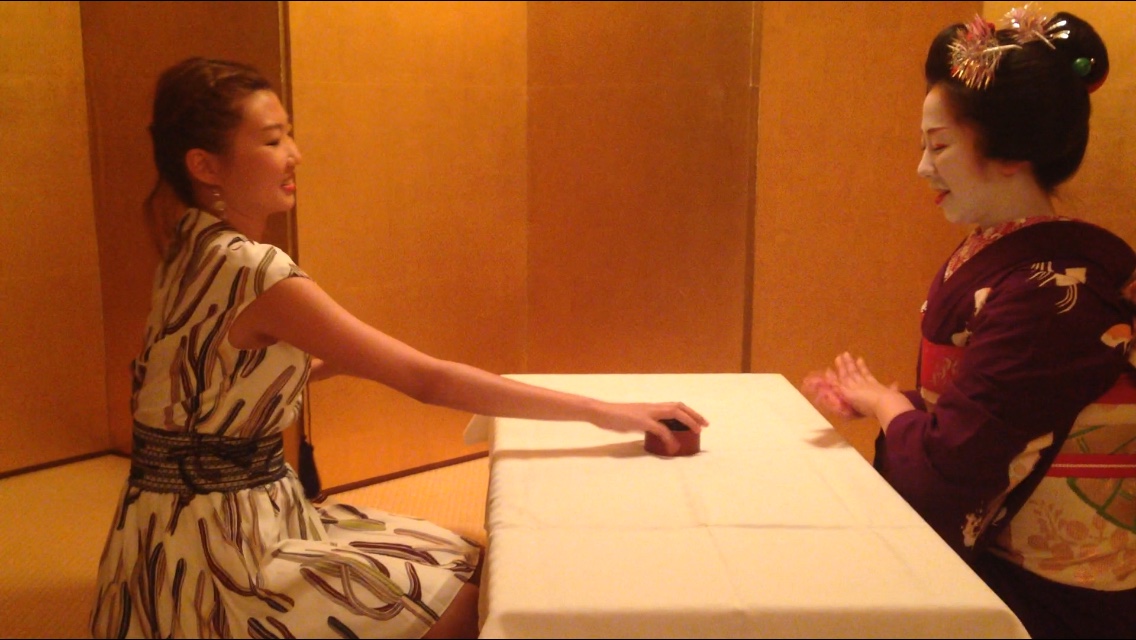 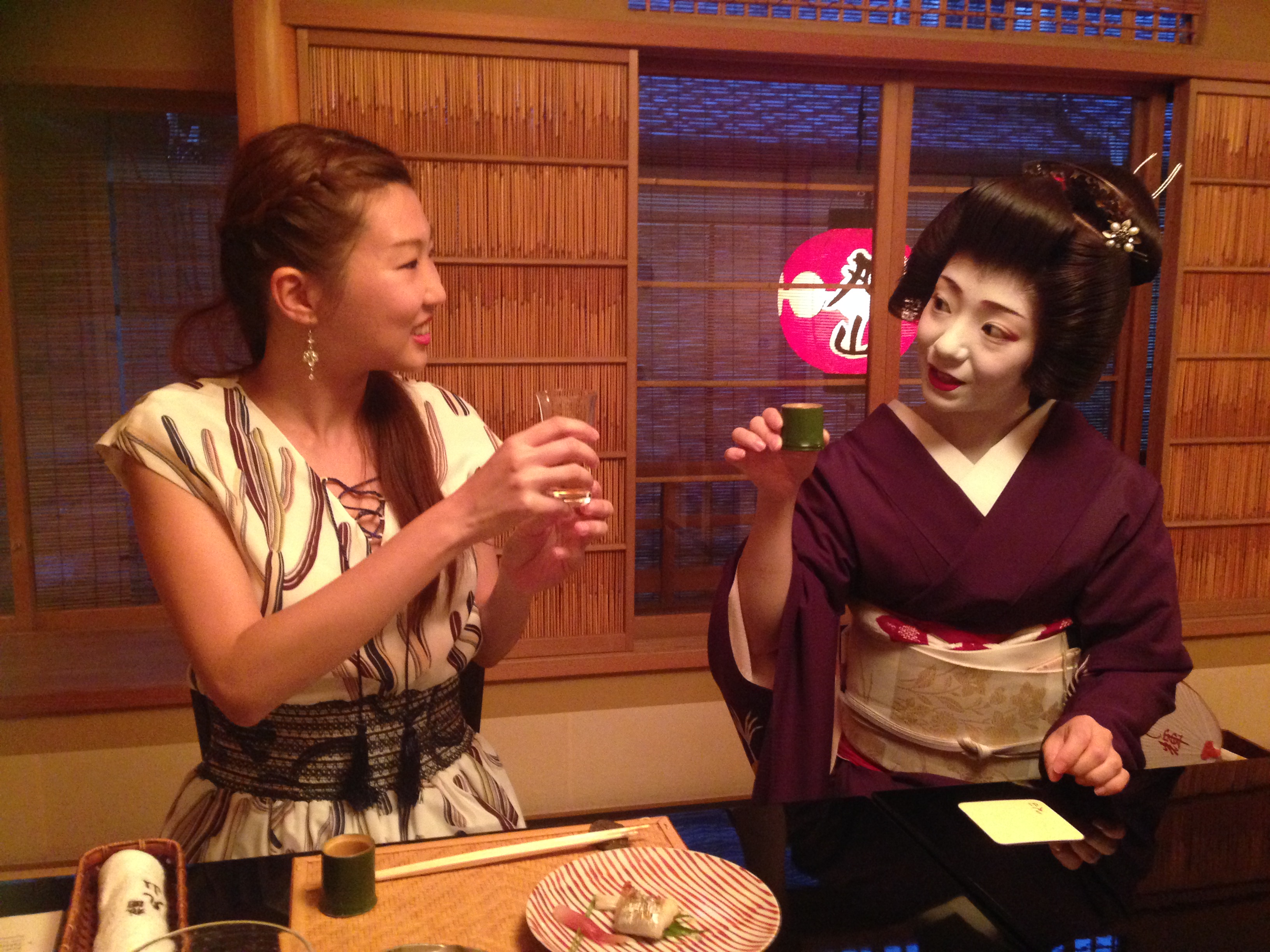 To keep the night going, we continued to wine and dine, and even played some games. It was so fun that I wished it would never end..! Of course the end eventually came however we tried, I left the lively restaurant a little heavy hearted, and stepped out into an empty street with no one but shadows in the late night. As I glanced back, the party with Geiko and Maiko faded like a dream, and felt strangely faraway…..aw….!